Next food is Nekbat. Have you guys ever heard about Nekbat?

Nekbat is popular in Malaysia, especially in the East Coast in Kelantan and Terengganu. People usually called it Nekbat Terengganu and also known as a sweet dessert. This is how Nekbat look a like!  Delicious right? :D 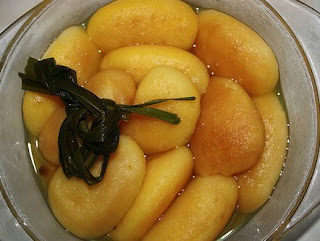 Nekbat is made from rice flour and eggs. Nekbat usually made in two phases. Which is the first phase The mixed ingredients is poured into the bronze mould and  covered with its lid. Once the nekbat is cooked,  the plain nikbat is taken and cool in another container.  The cooked nikbat turns spongy and cream in colour (due to eggs). At this stage, nekbat is plain and tasteless since no sugar added.

So the second phase is to immerse the plain nekbat in the boiling sugary water for a few minutes. The liquid must be enough to immerse or soak all  the plain nikbat. If you want  your nikbat to taste less sugar, so put little sugar in the boiling water. To make it taste better, you may put pandan leaf to get good aroma. If you wish, you can put a few cloves  and cinnamon stick. On the right is the nikbat post immersed in sugary water. This dry Nekbat last longer and can be stored in the refrigerator. 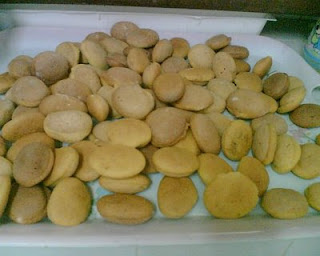 As you can see the picture on the left side is before they are being dip in the sugary water. 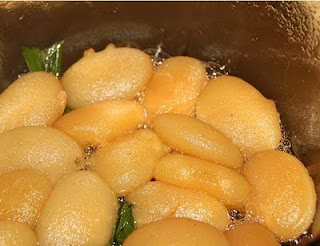 The picture on the right, the nekbat immersed in sugary water and you can see the nekbat expanded in size.

But if you want to add some colors, you may add any colors that you want. Usually people add blue or red color in it. 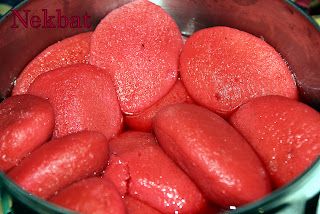 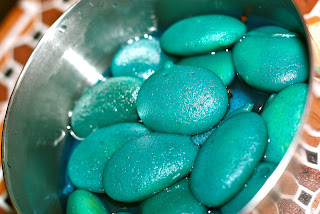 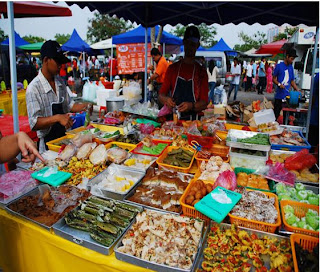 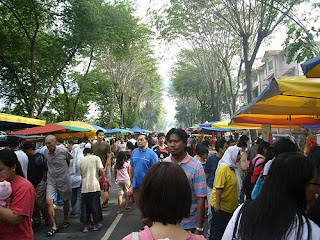 Nekbat is popular during during Ramadhan season and they usually sell it at ‘Bazar Ramadhan’. So there is no other place that you can find the nekbat other than ‘Bazar Ramdahan’ because it is quite hard to find during normal day.  Nekbat is usually served during Ramadhan as dessert. If you really want to try, you can buy the sugary nekbat from Ramadhan markets all over Terengganu or if you want to try to make it by yourself you may buy the plain nekbat from the market. 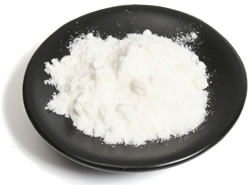 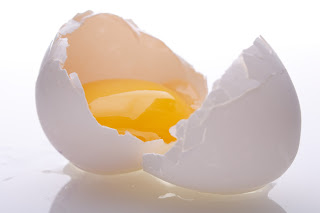 What do you think about the nutrition fact? Well, nekbat is a healthy food since it It is made from rice flour and eggs. As we all know flour contain minerals that helps your bones develop and your wounds heal. Other than that it is also contain minerals that also helps you produce red blood cells and supports your nervous system.

For the egg they supply all essential amino acids for humans, and provide several vitamins and minerals,   Eventhough we have to add sugar but still it would not affects your healthy because we can still control the amount of the sugar.